DeKalb County must adopt new anti-discrimination policies and training and pay $190,000 in damages and lost wages to a former employee to settle a federal lawsuit alleging county officials retaliated against a woman who complained of sexual harassment, government prosecutors said Friday.

Federal prosecutors filed the lawsuit earlier this year, alleging that DeKalb County retaliated against Cemetra Brooks, who said she was the subject of unwelcome sexual advances, comment and conduct by the deputy director of the county's Facilities Management Department.

A month after she filed a sexual harassment complaint with the county, the deputy director's supervisor, the director of Facilities Management, asked the county's human resources office for information that would help him to fire Brooks during her initial six-month probation, federal prosecutors said.

"According to the lawsuit, on advice of a high-level county official, the director extended Brooks' probation by three months instead. However, near the end of her extended probation, the director fired Brooks without giving her any reason," they said.

The award of $190,000 to Brooks includes $149,000 in alleged compensatory damages and $41,000 in gross back pay. DeKalb County said it was settling the case even though it "specifically denies the allegations and claims included in the charge of discrimination," according to a court document. 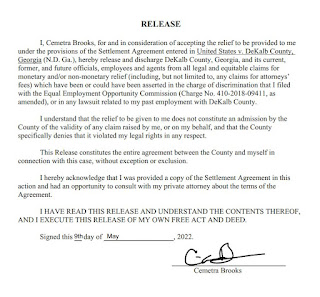 As part of the settlement agreement, DeKalb County will be required to develop policies against discrimination and retaliation and submit them to the U.S. Department of Justice for approval.

"Within forty-five (45) days of the entry of this Agreement, the County shall submit to the United States, for review and approval, copies of its written anti-discrimination and retaliation policies, including its procedures for reporting employee complaints of discrimination and retaliation. If the County does not currently have a policy on any of these matters, the County shall draft a policy on such matter and then submit it for review and approval within the same time period for current policies," the agreement states.

Supervisors and managers in the county's Facilities Management Department will have to be trained on those policies and on the types of conduct in the workplace that violate Title VII of the Civil Rights Act of 1964, which prohibits employment discrimination based on race, color, national origin, sex or religion. The act also prohibits retaliation against employees who oppose discriminatory employment practices.

Every four months, DeKalb County will be required to provide copies to the federal government of any discrimination complaints involving the Facilities Management department until the settlement agreement expires in December 2023.

"Probationary employees are especially vulnerable to discrimination as they have fewer employment protections than permanent employees and are often reluctant to file a complaint since it could easily cost them their jobs," said Assistant Attorney General Kristen Clarke of the Justice Department's Civil Rights Division. "This settlement agreement underscores that Title VII's protections apply equally to probationary employees."

The Equal Employment Opportunity Commission's Atlanta district office investigated Brooks' discrimination claims and referred them to the Justice Department for enforcement action. Brooks was an Administrative Specialist in the Facilities Management department in 2018, according to a public salary database.