The current agreement, which covers emergency ambulance services and billing and collection, was to have ended at the end of this month. The extension means the agreement will be in place through the end of the year.

The vote was 6-1-0, with Commissioner Nancy Jester voting against the extension

Interim DeKalb County Attorney Vivian Ernstes said legal and other matters could not be resolved in time to avoid the extension. While the legal issue was not identified during commission's vote, Commissioner Jester was able to obtain an acknowledgement from Ernstes that it arose "within the last month."

After originally planning to rename only one block, the city of Stone Mountain is now proposing to rename the entire four-block length of a street currently named for the white supremacist who was the city's mayor from 1946 to 1949.

Venable Street, in the heart of the city's historically black Shermantown neighborhood, is named after James Venable, who founded and was the Imperial Wizard of the National Knights of the Klan from 1963 to 1987. His Ku Klux Klan faction often marched through Shermantown as it held rallies every year on the top of Stone Mountain and on nearby land his family owned. Venable's family owned Stone Mountain and its granite quarry when work on the mountain carving began in 1923. Venable died in 1993 at age 92.

CBS46 News Atlanta (WGCL-TV) interviewed some of Shermantown's residents about the change, including William Woodson Morris, 91.

DeKalb County Commissioners are scheduled to vote this coming Tuesday evening on a request to put a fast-food restaurant in the parking lot of the Citadel Shopping Center at the corner of College Ave. and Memorial Dr., across the street from the Original House of Pancakes.

The proposed drive-through Popeye's would be replace the vehicle emissions inspection station currently located in the parking lot at 5100 Memorial Dr., which serves Office Depot and other businesses. 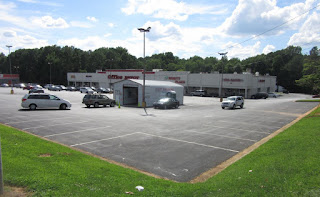 The proposed site plan is for a 2,400-square-foot building with a drive-through window. The developer proposes 18 parking spaces, including two handicapped spaces that would be connected by a new sidewalk to the sidewalk along Memorial Dr.

This year, 2019, is a record year for sewer spills in DeKalb County.

There had been 184 spills in the county as of Sept. 1, 2019, according to a table accompanying a news story in the latest print edition of The Champion newspaper, the county's legal organ. At least three other spills have occured since then:
- There was a "major" spill of 18,840 gallons on Robert Nash Court in Tucker on Sept. 3. A blockage sent sewage into Lake Prestwick.
- There was a "major" spill of 217,800 gallons of wasterwater on Sept. 6 at 984 S. Indian Creek Dr. in Stone Mountain. Sewage flowed into Snapfinger Creek because of a structural defect in a 30-foot creek crossing, a county notice said.
- Four days later, on Sept. 10, there was a "minor" spill of 1,900 gallons of sewage on Carson Valley Dr. in Tucker.
Even though 2019 has more than three months to go, the total so far this year of 187 spills surpasses the total for the entire year of 2017, when 186 spills occurred. At the current rate, DeKalb County will have had 240 sewage spills by year end.

The DeKalb County Board of Commissioners will hold a legislative retreat on Friday in the Maloof Auditorium in Decatur.

Among the items to be discussed:
- Budget and policy priorities for the 2020 Fiscal Year, including preliminary department budget targets
- Legislation in the 2020 General Assembly, including a report on this year's legislative session and identifying priorities for next year.
- Discussion of the latest amendment to the agreement between MARTA and local governments, including DeKalb County.
- Discussion of concerns about voter registration and voting, including ballot access.

Retreats are informational in nature and are less formal than regular commission meetings. They are usually held every three months and do not include a period for public comments.

DeKalb County CEO Michael Thurmond says he is "exploring his options" regarding two U.S. Senate seats that will be up for election next year, the Associated Press reports.

Thurmond was a Democratic U.S. Senate candidate in 2010, losing to incumbent Republican Johnny Isakson by a 58 to 39 percent margin. Isakson announced last month that he is retiring from the Senate at the end of this year for health reasons.

An Atlanta Journal-Constitution article also lists Thurmond as among those "weighing whether to compete for Isakson's seat."

A developer has made an unsolicited proposal to MARTA for a Transit Oriented Development at Kensington Station at Mountain Drive and Memorial Drive, MARTA General Manager and CEO Jeffrey Parker told county commissioners on Tuesday.

Parker revealed the proposal at a Committee Of The Whole meeting of the Board of Commissioners. He said it is being reviewed by staff, which will make a recommendation to him. The MARTA board would then pass a resolution to issue a Request For Proposals.

Commissioner Lorraine Cochran-Johnson expressed concern about this process. "It sounds as if you would literally create an RFP if you like the proposal," she said. "To me that raises a little bit of a concern and a red flag."

She also noted that she and several other commissioners were not informed of the proposal earlier.

The Associated Press reports two machines that hold detailed information about voters, including names, addresses, dates of birth, and driver's license numbers were stolen from an Atlanta polling place on Monday night. The machines, used to check in voters, were taken from the Grove Park Recreation Center, a voting site for a special election for a seat on the Atlanta Board Of Education
Posted by PRISM DeKalb at 5:21 PM

DeKalb County on Monday afternoon lifted its boil-water advisory for the entire county.

"Authorities have confirmed that the water supply in all areas of the county is safe for consumption without boiling," the county said in a statement.

Two three-minute power outages on Friday night prompted DeKalb County to issue the boil-water advisory on Saturday morning. Thunderstorms were blamed for the outages at the Scott Candler Water Treatment Plant on Winters Chapel Rd., which treats water drawn from the Chattahoochee River.

Even though backup generators restored power within three minutes each time, the county's Department of Watershed Management was obliged to check water quality after water pressure dropped to dangerously low levels in parts of the system.

On average, thunderstorms occur in DeKalb County on an average of 50 to 55 days every year. Storm-related electrical power outages are not uncommon.

The City of Pine Lake is holding a second public hearing on Tuesday, Sept. 24, on a new zoning ordinance and zoning map for the city. Residents are invited to attend the 7 p.m. hearing in the City Council chambers at 459 Pine Dr.

A copy of the proposed ordinance and map is available for public inspection in the City Clerk's office at 462 Clubhouse Dr.

An East Atlanta woman in her 50s has become the first human case of West Nile Virus in DeKalb County this year. The DeKalb County Board of Health says it is going door to door is working to educate the public about eliminating mosquito breeding sites.

Earlier this summer, the health board announced it had trapped WNV-positive mosquitoes at 11 different locations in DeKalb County. West Nile Virus is transmitted to humans by mosquitoes. People 60 years of age and older have the greatest risk of severe disease from WNV, which affects the central nervous system and can be fatal.

There were two West Nile virus cases in DeKalb County last year, one of them was fatal.

The City of Pine Lake plans to install Peace Poles on Rockbridge Rd. Peace poles are handmade monuments that carry the message "May Peace Prevail On Earth" in many different international languages.

The idea was started in Japan in 1955 by Masahisa Goi, who founded The World Peace Prayer Society in response to the bombings on Hiroshima and Nagasaki.

The Pine Lake City Council approved spending $3,000 on the Peace Poles earlier this month after hearing information and plans from David Burt, who has a Masters degree in city planning and has served as an economic develeopment consultant to Hapeville and Avondale Estates

Business owners, churches, community members and residents will be involved in handcrafting each pole.

The City of Stone Mountain has abandoned any plans to expand its city limits beyond current lines, the city has disclosed.

"The City of Stone Mountain has no plans to propose any annexation," according to a one-line announcement in the city's monthly newsletter.

"We are not promoting, requesting, presenting or proposing any annexation," Stone Mountain City Manager ChaQuias Miller-Thornton told City Council members at their regular meeting this month.

Beginning in 2016, Stone Mountain floated a proposal to almost double the geographical size of the city and increase its population by a little more than 50 percent (from 6,109 to 9,235).  The city's analysis of that annexation proposal (a PDF file) can be found at http://bit.ly/2m02HpO .
Nickel Works Consulting was hired by the city in 2017 to do surveys and outreach in conjunction with the annexation proposal. However, the city's annexation task force committee has not met since February 2018.

In 2000, Stone Mountain Mayor Chuck Burris proposed expanding the city limits to all locations that have a Stone Mountain postal address. The proposal, which failed to advance, would have increased the city's population to more than 20,000.