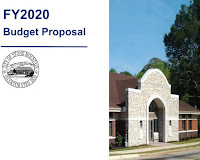 Under the city's proposed FY 2020 budget, fines and forfeitures would represent the second largest proportion of the city's revenue -- $840,974, or 18.2 percent, a level that the Institute for Justice, based in Arlington, Va., says "suggests the cities' fines and fees behavior goes beyond what is necessary to advance public safety -- and thus qualifies as taxation by citation."

In a report last month, the institute, which litigates property rights cases nationwide, reviewed fines and fee revenue in Clarkston, Morrow and Riverdale. The report did not examine Stone Mountain's budget, but it said Georgia cities similar in size to Stone Mountain took in about three percent of their revenues from fines and fees. That's far lower than the 18 percent in the proposed Stone Mountain budget.

The amount of fines and fees projected in the 2020 budget is an almost eight percent increase ($61,050) from the $779,924 in the 2019 budget. Those amounts do not include additional court assessments for Local Crime Victim Funds, the Georgia Superior Court Clerks' Cooperative Authority and a Georgia law enforcement supplemental retirement fund.

The budget proposal also includes $70,000 for a review and rewrite of the city's code.

Under the proposed budget, $233,499 in excess ad valorem tax proceeds would be spent on renovation of the former train depot in the city's downtown, which served as the Stone Mountain City Hall for many years.

The city will hold a public hearing on its 2020 budget at 6:30 p.m. on Tuesday, Nov. 19, at City Hall. The budget is scheduled for a first read at the council's work session the same evening, with a final vote on the budget at the council's regular meeting on Dec. 3.

A summary of the proposed budget can be found at:  http://bit.ly/2rj6KQP

Line-by-line budget details can be seen at:  http://bit.ly/2CsSO9a