Another $1.757 million in loans have been approved, but have not yet closed. Including pending and incomplete applications that may not be approved, the program has offered $10.287 million in loans, according to a report presented to the Board of Commissioners.

The county launched the loan program this summer, using some of the $125 million the county received in Covid-19 funding from the federal government six months ago. The Better Business Loan Program was developed by DeKalb County CEO Michael Thurmond’s administration, in cooperation with the Small Business Subcommittee of the DeKalb COVID-19 Strategic Task Force, which is chaired by Commissioner Steve Bradshaw.

"Many of our minority business may not have created the basic fundamental organizational structure needed to qualify even for a progam such as this. That's the real challenge for community-based businesses. Sometimes they've never gotten a business license," Thurmond said. "The thinking is those businesses are businesses we can scale up."

DeKalb County would pay a more than $1 million penalty and risk paying increased fines under a proposed federal court settlement that would give the county another 7 1/2 years to satisfy a 2011 consent decree to reduce sewer spills, county officials said Monday.

Calling the proposed modification to the consent decree "a compromise we can all be proud of," DeKalb County CEO Michael Thurmond said "we are poised now to continue a decade of renewal in our county."

Deputy County Attorney Matthew Welch, the county's lead negotiator handling the decree, said the county will get a "7 1/2-year extension with completion of rehabilitation in the priority sewer areas." The county had already been given 8 1/2 to 9 years to do this work, he said.

The DeKalb Board of Registration and Elections will hold a special called meeting on Friday, September 25 at 9 a.m.

The meeting will be conducted via a Zoom teleconference and will be streamed on DCTV’s UStream channel.

No agenda for the Sept. 25 meeting had been posted on the board's web site when the meeting was announced. The agenda for the board's last meeting, on Sept. 14, was posted about 75 minutes before the meeting took place. At that meeting, the board considered planning for the November 3 election, Covid-19 precautions, and the placement of absentee voting drop boxes.

Public comments for the Sept. 25 meeting may be made by sending an "email of one page or less to electionspubliccmnt (at) dekalbcountyga.gov between 9 a.m. and 9:30 a.m. the day of the meeting.

On the eve of a scheduled Board of Commissioners vote to amend DeKalb County's Comprehensive Plan, Commissioner Steve Bradshaw has issued a statement entitled "Memorial Drive Study." Here is the full text of Bradshaw's statement:

Tomorrow evening, an item will appear on the zoning agenda regarding the Memorial Drive Revitalization Study. I will be making the motion to approve this item. As a result of this action, this study will be adopted as a part of our Planning and Sustainability Comprehensive Plan.

As this item has made its way through our zoning cycle, I have observed and listened as others have commented. Now, it is time for you as my constituents to hear directly from me on this matter.

I would like to begin by thanking the folks at Pond and Co. for managing an outstanding process and producing an excellent report. At the beginning of this process, my charge to them was to produce a document that would provide us with what I call “actionable intelligence” as opposed to just another report that would be collecting dust on a shelf somewhere. That mission objective has been achieved. I was impressed with Pond’s methodology from the beginning. And I am pleased with the study results.

Only Clayton County scored lower than DeKalb in the rankings, which are based on community vitality, equity, economy, education, environment, food and nutrition, population health, housing, public safety and infrastructure. Forsyth County scored much higher than other counties surrounding Atlanta.

Atlanta-area counties and their scores:

A taxpayer-funded economic study of Memorial Drive outside of Interstate 285 imposes major zoning changes that will affect the rights of property owners along and adjacent to the corridor.

Buried in the $174,500 study are what the POND consulting team calls "dramatic" changes to the land-use "character" areas that control DeKalb County zoning decisions.

The DeKalb County Board of Commissioners is being asked by the Department of Planning & Sustainability to immediately amend the county's Comprehensive Plan to adopt the changes detailed in the report. A vote is scheduled on Thursday, September 24.

On the next to last page of the report's "Executive Summary," and on page 31 of the 39-page "Action Plan" are maps detailing "specific changes to Character Areas in the Comprehensive Plan and zoning to align land use regulations" as described in the report.

Under DeKalb County's zoning code, these character areas determine what zoning districts and uses are permitted. Property owners and neighboring residential homeowners have not been individually notified of the plans to change the land use of parcels along Memorial Drive.

The District 4 Community Council, a citizen review panel whose members are appointed by county commissioners, expressed concern about these changes when it voted 7-3 at its August 18 meeting to recommend approval of the study "with the condition that nothing changes in land use or the zoning districts, everything stays the same."

While the Comprehensive Plan and its land-use maps govern all zoning decisions in DeKalb County, county officials have sought to downplay the land-use changes mandated in the report, leading one critic to call the Memorial Drive study a "Trojan horse."

Among the zoning land-use changes included in the report:

Most of central DeKalb County's census tracts saw evictions take place during the month of August, according to an Atlanta Regional Commission tracking tool.

Two census tracts near Pine Lake and Stone Mountain saw evictions filed against more than 10 percent of their renting households in August, the highest rates in the county. 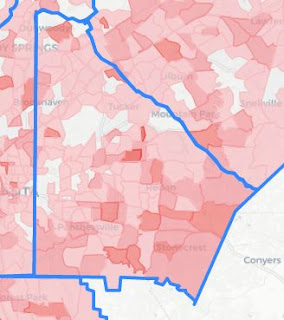 The ARC notes its map only reflects formal evictions found by searching county court websites. It says it does not reflect forced moves due to illegal or informal evictions, which it says are far more numerous than those that go through the formal, legal eviction process.
Posted by PRISM DeKalb at 10:30 AM

A recent online meeting held by DeKalb County to consider a swap of park land so that Blackhall Studios can expand has been criticized as being one-sided by a leader of a group that opposes the deal.

"Folks from county government painted a picture of a lovely new park along Bouldercrest Road just below McNair High School. Land on both sides of Bouldercrest is owned by Blackhall now, but the county would get the land by trading away forested land and trails neighboring it on the south," according to an account of the online public meeting in the Saporta Report.

"Nothing is that perfect ... there is no balance here, there is no serious public comment," said Jacqueline Echols, a leader of a Stop The Swap campaign and the board president of the South River Watershed Alliance.

The association has not received a rent payment from Silver Dollar City since March, SMMA CEO Bill Stephens told board members at a July meeting.

At that meeting, Stephens said a tentative agreement had been reached under which Silver Dollar City would resume paying rent in October. It would also begin paying an additional $20,000 each month during the remainder of its current lease, which ends in 2027, in order to pay the deferred rent amount.

It is unclear if the tentative agreement has been finalized. It was not listed on the agenda for the association's August 24 board meeting and is not a listed agenda item for its board meeting scheduled for later this month.

A federal judge has dismissed a 2019 lawsuit filed by the South River Watershed Alliance over releases of raw sewage in DeKalb County, ruling the group did not prove that federal and state agencies have been lax in addressing the problem.

"The Court does not take lightly Plaintiffs’ allegations and evidence of DeKalb’s repeated discharge of sewage into public waterways," Grimberg's ruling states.

Stone Mountain ranks in the bottom third in a list of the best suburbs in the Atlanta metro area compiled by Niche.com, a review website that compiles data about communities, schools, and employers.

Niche ranked Stone Mountain No. 80 in its list of the Best Suburbs to Live in the Atlanta area. The list was topped by Decatur, Alpharetta and Johns Creek. North Decatur and Druid Hills ranked No. 4 and No. 13, respectively.

The web site gave Stone Mountain "B" grades for housing, nightlife, diversity and being good for families and "C" grades for public schools and crime and safety. Data used for the "report card" appears on the Niche.com site.

While it fared poorly in the list of best Atlanta suburbs, Stone Mountain ranked ahead of the nearby DeKalb County cities of Pine Lake and Clarkston.

The development authority's board hasn't posted a single agenda this year, the Business Chronicle said, preventing the public from reviewing items to be considered at Decide DeKalb's meetings, which generally take place on the second Thursday of each month.

The most recent minutes on the Decide DeKalb web site are from its June 11 meeting.

A spokesperson for Decide DeKalb said agendas should be posted on time in the future. She said the failure was because the development authority didn't have a marketing director.

The City of Pine Lake is proposing to update the city's sign ordinance, prompted by improvements being made to Rockbridge Rd. between Allgood Rd. and Rowland Rd.

The city has scheduled a public hearing later this month on a revamp of the "Signs" section of its city code. The Zoom meeting will take place on Tuesday, Sept. 29, at 7 p.m.

The update, which appears to be based on a Model Sign Ordinance prepared by the Georgia Municipal Association, establishes new requirements for obtaining sign permits.

The proposal is intended "to address modern types and lighting of signs to ensure such signs do not obstruct vision, distract drivers or otherwise impair the safe movement of vehicles and pedestrians."

DeKalb County's development authority is participating in a $37 million bond issue to acquire, equip and install machinery and equipment at a distribution facility to be rented to the parent company of Sugar Bowl Bakery, a California-based, family-owned business.

A bond resolution was passed at Decide DeKalb's Aug. 13 meeting. The authority says it has a rental agreement with Ly Brothers Corporation. Superior Court Judge Linda Hunter will consider the bond issue at a hearing at 11 a.m. on Monday, Sept. 14.

It was announced this spring that Sugar Bowl Bakery would open a new $37 million east-coast hub at 3301 Montreal Industrial Way in Tucker. The company said that, over the next five years, it would create about 400 new jobs.

The company bakes palmiers, madeleines, brownie bites, fritters, and other items that are sold at groceries and warehouse clubs.

"Election will be over and whoever wins, it is less uncertainty," he said.

The Sugar Bowl Bakery was started in 1984 by five immigrant brothers. The company says it is one of the largest family- and minority-owned bakeries in northern California.

Secretary of State Brad Raffensperger said Tuesday that there were 1,000 cases of "potential double voting" in Georgia's June 9 primary, where individuals voted by absentee ballot as well as in person.
"We're talking about 1,000 people statewide," in 100 counties, Raffensperger told reporters, without offering any evidence. "The voters knew what they were doing."