Five months after it began, the DeKalb County Department of Planning & Sustainability has, with little advance notice, announced the last of four public meetings for its Memorial Drive economic planning study.

The final "Memorial Drive Revitalization Corridor Plan" will be revealed in 30-minute presentations at noon and 2 p.m on Saturday, Nov. 16. The department has scheduled the meeting for the DeKalb Conference Center at Georgia Piedmont Technical College, 495 N. Indian Creek Dr., Clarkston.

Notice of the meeting was emailed to the public by the department on Thursday, Nov. 14, less than 48 hours before the meeting is scheduled. 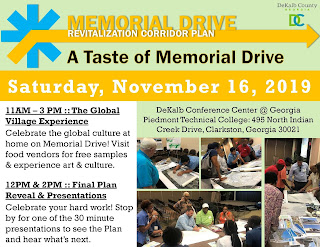 There is a web site for the $175,000 study, being done by Pond & Company, but other than a mark-up map for public comments that was unveiled over the summer, it offers no information about the study's findings. It does not reflect any of the information that was gathered at meetings that began in June, nor does it explain the decision-making process that has gone into the final plan.

The web site says the effort is a nine-month planning process. It offers no explanation as to why the study is being concluded after only five months.

As was the case in previous meetings, there will be no town-hall forum for citizens to ask questions or discuss ideas as a large group.

"The Memorial Drive Revitalization Plan project team will set up displays highlighting the process, ideas and recommendations for Memorial Drive. Departments from DeKalb County which will play a key role in the plan's implementation will have information tables at the event," a county press release says.

The county says food vendors will be offering free samples between 11 a.m. and 3 p.m. on Saturday in "A Taste of Memorial Dr." to "celebrate the global culture" along the five-mile stretch of Memorial Drive, which the Atlanta Journal-Constitution described earlier this year as being "home to deteriorating motels, fast food restaurants and aging businesses."