Doraville school one of Georgia's Places in Peril

A DeKalb County school is on the Georgia Trust for Historic Preservation's 2020 list of 10 Places in Peril in Georgia. It is the only DeKalb County site on the group's annual list. 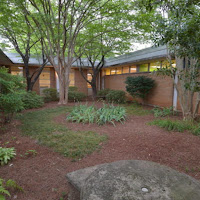 The Cary Reynolds Elementary School, located at 3498 Pine Street in Doraville, was designed by the late architect-developer John Portman, the trust says. Originally named the Sequoyah Elementary School, the school was built in 1961.

Located in the Northwoods Historic District, the DeKalb County school is scheduled for SPLOST-funded maintenance. However, significant investments are needed to improve the building for students and faculty, according to the trust.

"Advocates fear that the school, without the promised interventions, will be abandoned and demolished, despite its historic significance," the Georgia Trust for Historic Preservation says.

The Places in Peril program is intended to raise awareness about significant historic, archaeological and cultural resources in Georgia, including buildings, structures, districts, archaeological sites and cultural landscapes that are threatened by demolition, neglect, lack of maintenance, inappropriate development or insensitive public policy.
Posted by PRISM DeKalb at 8:13 PM