A permanent Ferris wheel on Memorial Drive is one of the suggestions of the Memorial Drive Revitalization Corridor Plan, which says the the public is not asking for major changes along the thoroughfare that runs from Interstate 285 to Stone Mountain.

DeKalb County Commissioner Steve Bradshaw last year allocated $140,000 of his District 4 reserves for the study. The county's Department of Planning and Sustainability Department contributed another $34,500 to help pay for the team of consultants.

"A permanent ferris wheel that that could be visible from Stone Mountain," is a potential concept for the area along Memorial Drive near Hambrick Rd., according to a portion of the report seen by PRISM DeKalb. Atlanta already has a 200-foot-tall Ferris wheel at Centennial Olympic Park.

The first public meeting for the study was held in June 2019, the last meeting was held in November.

Increased density "is generally not desired" in the area around Memorial and Hambrick, the report states. It says a tourist or festival activity, park space and civic cultural opportunities were discussed during the process.

The report also suggests housing (including senior housing) along the south side of Memorial Dr. between Village Square Dr. and Hambrick, in the area currently occupied by the Village Square shopping center and the International Trade Mall (formerly the Value Mall). 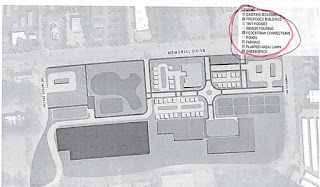