The county has scheduled a meeting Thursday night on zoning plan changes it wants to make along Covington Highway between Memorial Dr. and I-285 and in a separate area around I-285, Durham Park Rd. and Redan Rd., including the intersection of Redan and S. Indian Creek Dr.

More than two years after DeKalb County adopted two tiers of a Kensington Memorial Overlay District, the county's Department of Planning and Sustainability wants to give them new names and allow car-rental businesses along Covington Highway. 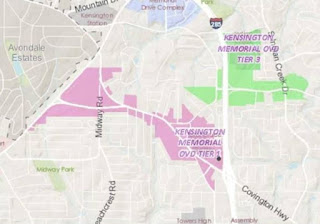 It appears that the department wants to change the name of Tier I to Covington Highway and Tier III to Indian Creek.

The two tiers of the overlay were approved by the Board of Comissioners on Sept. 26, 2017. There was considerable public opposition to four other proposed tiers that would have included Memorial Dr. The final report on the proposed overlays revealed that the outlines of all of the tiers and their permitted uses had been determined by county planners there were any public meetings.
Posted by PRISM DeKalb at 4:44 PM